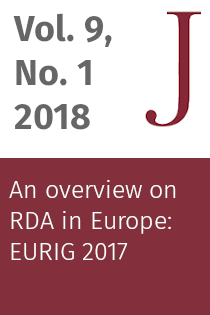 In 1966 Arthur H. Chaplin, president of International Conference on Cataloging Principles (ICCP), Paris, October 1961, with the cooperation of Dorothy Anderson, secretary of the Committee, published the annotated, “Provisional edition”, of the Statement of Principles (Paris Principles), which foreshadowed an international cataloging code.

Diego Maltese, a member of the Italian delegation at ICCP (librarian at the Central National Library of Florence), on the 4th of June 1967 wrote a letter to the Executive Secretary of ICCP to denounce the ambiguity and contradictory nature of the annotated edition.  In his opinion the idea of an international cataloguing code seemed to betray the spirit of the Paris Principles by those who "did a memorable work" for their approval.[1] The Paris Principles, in fact (according to Maltese), were the basis for the drafting of national codes, and not an international codes themselves.

It was after this comment of Maltese – commentary that the principles should not replace the codes – that Chaplin found it necessary to clarify that the Paris Principles were not the international code of rules that many hoped, but only principles proposed for the revision of existing codes or to the drafting of new codes of rules.

The need for a comparison of national cataloging codes, and their traditions, which took place in Paris in 1961, was dictated by the need to fulfill the purposes of Universal Bibliographic Control (UBC) and of the universal availability of publications. The standardization of procedures for the treatment of bibliographical data in an increasingly automated environment continues to challenge all bibliographic agencies with the same problems as in 1961, highlighting the practical and economic inevitability of mutually adopting shared standards at international level.

The hypothesis formulated by Chaplin after the ICCP of 1961 of having an international cataloging code was perhaps premature.  Today it is the economic benefits of sharing bibliographic data, as well as the technological environment and library science, which necessarily lead to having guidelines globally shared.

In fact, the hypothesis of a unique code has returned since the first years of this millennium (since 2003 in particular), with the IME ICC initiative of five regional meetings around the world, with a title quite explicit: IFLA Meetings of Experts on an International Cataloging Code. Following the second IME ICC meeting in Buenos Aires in August 2004, I asked Barbara Tillett, chair of the initiative, ten questions.  The third was as follows:

“What are the main challenges and the principal questions in the writing of an international cataloguing code, in the context of an information environment in rapid evolution?”

“Assuring cultural diversity may be the greatest challenge.  Keeping our users in mind as the focus for our work, it is important to provide bibliographic and authority information that meets their needs and is presented in a form that is easily understood.  That means writing in their language, in their script, and using terminology that they understand.”[1]

Barbara continued that there need to be options for cultural diversity and naming conventions used in different countries.  Indeed, the international cataloging code RDA (Resource Description and Access), likewise can have local adjustments to meet local needs of users.

As an example: since 2011, librarians in the German speakingcommunities (or DACH), have been engaged in a collaborative project involving Germany, Austria and Switzerland.[2] They have agreed to cooperate fully in the drafting and evolution of international guidelines without thereby being "traitors" to their long and prestigious cataloging tradition, and have become active partners of the RSC (RDA Steering Committee), with a seat on that Committee. Librarians in other European countries have adopted RDAorare working with the RSC in this direction. For example, starting 1st January 2019, Spain will also adopt the RDA guidelines (their decision was issued on 4th November 2016).

In 2017, the network URBE (Roman Ecclesiastical Libraries Union) and the Vatican Library adopted RDA. We are in Italy, and I pose a specific question: does it still make sense to have a national code in a global context (for better or for worse) in which the search of bibliographic resources can be done from anywhere in the world to any library? Or, is it more useful and more preferable to participate in the drafting of international guidelines, namely RDA, bringing our rich cultural heritage and our Italian cataloging background and perspective to an international dimension?

I have no doubt that working in an international dimension is an imperative and an advantageous choice for all parties concerned.

[2] An example of the influence they have been able to exert is the change with regard to the omission of initial articles in Preferred Title for the Work, following AACR tradition and NACO practice.  In response to a DNB proposal (6JSC/Chair/3 http://rda-jsc.org/archivedsite/working2.html#chair-63) RSC relegated the omission to an alternative instruction.

You may also start an advanced similarity search for this article.